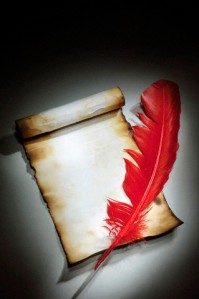 Being a parent, one of the challenges is finding enough time to indulge in a good book and as one of those people who likes nothing more than to just lose whole days as hostage to a fabulous story, it is actually one of the reasons I chose to work in Mayfair!Now don’t get me wrong here. There are plenty of reasons to work in Mayfair. All good.

With the challenges of childcare, I could have chosen to work closer to home, taking a few hours off my working day. However, that would mean losing precious reading time on my tube journey. It takes me an hour door-to-door, (tube delays willing), allowing at least 20 minutes twice a day to indulge in a good book. Or, as is more often the case recently, a good blog or magazine (I’m generally a fan of the written word!). Now, with the ability to draft and publish posts on my mobile WordPress app, the challenge is ever greater as the temptation to write creeps in to the mix!

One such blog I will always find five minutes to read is The Happy Logophile, where writer and mother Jo recently referred me to Brian D Buckley’s post about keeping a spreadsheet of all the books he’s read, so that when he’s old he can look back and find the worst thing is that he was a little bit “jazzed” about his reading list! Read it here.

This got me thinking about the number of times I’ve wondered what “that book” was – you know the kind of thing, where something triggers the memory of a scene or a character, or even the whole damn story, but nothing, not even a scouring of Amazon, can recall the title or the name of the author! Mostly these moments are fleeting, but frustrating nonetheless.

Of course, there are the books (and characters) I’ll never forget; those with whom I fell a little in love, Dick Bruna’s Miffy, Jack London’s White Fang, Jo in Louisa M Alcott’s Little Women and Roberta in E. Nesbitt’s The Railway Children; those that shocked me, like The Color Purple (Alice Walker), The Lovely Bones (Alice Sebold) and The Tenth Circle (Jodi Picoult), those that taught me, like The Diary of a Young Girl (Anne Frank) and To Kill A Mockingbird (Harper Lee) and those that just plain old touched my heart, like Charlotte Bronte’s Jane Eyre and Jane Austen’s Persuasion.

The trouble is, despite the entirely selfish reason for me to want to work in Mayfair, I still couldn’t honestly tell you off the top of my head what exactly I’ve read since taking the job a year ago. So I thought I’d look back along my bookshelf and share my 2011 reading list so far:

What’s next? Well, I’ve got a bookshelf full of all sorts next to my bed but that’s a whole other post! I have however, just picked up an Adele Parks novel – Men I’ve Loved Before so I’ll let you know what I think in due course.

Do you keep a list of books you’ve read? Do you blog it? Keep it online, in a beautiful notebook or a functional spreadsheet? Let me know or leave me a link and I’ll pop over and swap notes!

I look forward to hearing from you.

18 thoughts on “Do you keep a record of books you’ve read?”