I was asked to join this blog hop by the marvellous South of the River Mum. Apart from the obvious things, like a quick and long lasting solution to the financial crisis (so we can all take our lives off ‘hold’), a more widespread family friendly working culture in every company (so mums and dads get a better deal) and world peace, here are a few of the things that Mayfair Mum is lusting after at the moment:

I thought I’d start with this as it really is the stuff of wish list fairies It would cost the little winged creature c. £400,000 just to buy it – that’s before you’ve considered insurance and maintenance costs. Just imagine if I scratched this in the supermarket car park! Anyway, Mayfair Dad really misses having an old car to polish at the weekend and driving around with the wind in his hair, so if it would put a smile on his face, this would be top of my list. I could then let him drive us all around in the style he’d like to get accustomed to! It might also be my favourite car of all time but don’t tell anyone ok, ‘cos I’m supposed to like Ford Fiestas…

We’re fortunate enough to have a lovely large dining room/family room in our house. However, we still have our first table from our one bedroom flat that seats 6 max. I’d really like a table that extends to fit at least 8 at a time, if not more – that way we’d be able to host lovely big family lunches with all the nieces and nephews around the table in one go!

My current choice is a rug or a wrought iron chair (no cushions!), so something like this would be lovely for those lazy summer afternoons (‘cos there are so many…!). Oh well. A girl can dream, right?

A real all singing/dancing HD ready television would solve all our viewing problems in one go when we switch to digital next year and would look really nice above our fire place in the lounge. It might have to have some kind of satellite sports channel so that Mayfair Dad could keep up with the Grand Prix and a whizzy recording facility so that we can have CBeebies (and Downton, Made in Chelsea) on demand – the Little Chap still hasn’t grasped the concept of television scheduling and it would just make my life easier to schedule.

I’ve got a great 10 megapixel digital camera, that Mayfair Dad bought me for my birthday when we were expecting the Little Chap. Trouble is, we now admit, that the shutter speed isn’t as quick as our son!

And for the Little Chap…

I didn’t think it was fair to write this post without mentioning The Little Chap’s list, after all, we’ll be helping him to write to Father Christmas soon and it’s his birthday in just a few weeks.  So here is his list too:

So he can be just like Peso in The Octonauts! Mayfair Mum is hoping Father Christmas will put one in his sack (wink!)… 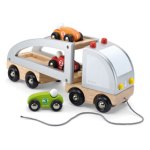 I’m not sure of the attraction, other than that he doesn’t have one, and he’s seen this one by Melissa & Doug in the Great Little Trading Company catalogue that has appealed. I hope they don’t mind me reproducing their photograph – it’s just that none other would explain so well exactly why he is lusting after it so much.

So that’s our list. What’s on yours? Let me know in the comments below or join in the blog hop and post a link to your list at Mummy Manda’s blog here! Go and check out her blog anyway, she’s just launched a new look and it’s great.