I have always been “a bit musical”. At school, we thought of each other in childlike fashion as musical, sporty or academic. I was no straight A student. I enjoyed netball and rounders and the one time I scored a goal on the lacrosse pitch, I never felt better about myself, but they never picked me for the team and anyway, my heart lay in the music department.

I learned clarinet age 9 and piano age 13; I played in school orchestras and wind bands and sang in the school choir. Autumn was always my favourite school term. Not for the newly sharpened pencils and slightly too big school uniform but for the Christmas carol concert and all the rehearsals. Even my short and inglorious stage career revolved around being a chorus girl in a production of Music Hall during the sixth form, poor compensation for not being able to get a part in West Side Story the term before!

I cannot get through a day without singing, humming, or listening to some form of music. Shockingly, at University I did not join a choir or any musical groups. I was never a Grade 8 musician and felt I would not be good enough which, seeing what Gareth Malone has done with the mixed bag of singers/non-singers he found for his TV choirs, is probably quite ridiculous. Besides, I preferred the lure of uncharted waters in the Union bar to the spirituality offered by the University Chapel Choir!

When I came home from Uni, I lived at home for a while where I joined our local church choir with my sister. I enjoyed the singing and particularly the emotion of sung communion. I became familiar for the first time with the Kyrie, Agnus Dei and so on. The highlight for me was learning to sing Faure’s Requiem for Easter which is still one of my all time favourites (possibly only surpassed by Karl Jenkins The Armed Man, A Mass for Peace) and then landing the solo at our Christmas Eve carol concert for the opening carol Once in Royal David’s City. This was not; I hasten to add, because I was the strongest soprano in the choir, – far from it – but because I was brave enough to stand in for her at the last minute! It is an understatement to say that my being able to sing a favourite carol of all time, solo, and no accompaniment, in front of one of the busiest congregations all year helped boost my confidence…

Unfortunately, moving away from home and getting married meant I had to leave the choir and I never joined another. My musical career ended for a while. Sunday mornings were for lazy breakfasts in bed with the OH, relaxed strolls through the village or brunch with friends. There was no room for a rigorous choral schedule. I had even had to leave my beloved piano at home, as it would not fit where I lived until about four years ago, when we bought a bigger place. By then, of course, I was out of the habit of playing or singing anything other than the latest smash hit chorus in the shower! While I did make the effort to pick up the piano again, the Little Chap’s arrival put paid to keeping that up for very long!

Perhaps to compensate for this, since the Little Chap was born, I have taken every opportunity to sing to him – nursery rhymes by day and lullabies by night. I learned the lyrics to Brahms Lullaby as some sort of demented challenge – all five verses! One night I sang my way through all thirty songs (several times!) from the CD I had bought him. He was about five months old. It was the first time the poor Little Chap had been sick and the GP suggested we feed him his eight-ounce bottles at a rate of one ounce at a time, waiting five minutes before the next ounce. That was one long feed and one cranky baby!

So why am I telling you all this? Because I want you to understand why I love Gareth Malone and BBC’s The Choir so much. Knowing how much I love music and singing, you will understand why I enjoyed the previous series but now he has offered his support to the military wives, I just cannot speak highly enough of what he does.

“Wow!” is all I can say to the women who joined him. I could barely sing the National Anthem at our local Remembrance Day service. The final words of the service moved me so that my eyes filled, my throat constricted and I thought for a moment I would only manage a tuneless squeak.

These military wives (and I guess, nowadays, husbands) are on the front line physically, mentally and emotionally. They carry on their daily lives, raising families, doing jobs, running homes like the rest of us but all while their loved ones face hell on earth bravely to fight a war few people seem fully to understand. The courage and sacrifice of our forces is little spoken of – the media prefers to focus on the ‘horrors’ of allied troops killing innocent locals, or the job cuts necessitated by years of overspending resulting in a lack of proper equipment for them on the front line.

For those women to be able to sing a note while making such a great sacrifice is truly amazing. In Gareth’s own words, they are inspiring. I find them both breathtaking and humbling.

Gareth has spotted the opportunity to give these women, wives and mothers, their voice, to enable them to find an outlet for the pent up frustrations, resentments, anger and sadness in a positive way, and frequently by focusing on the positive – the strength of their love for their missing other halves – through the catharsis of tears. 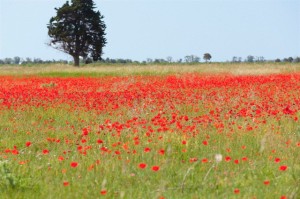 However, he has done more than that. He has taught those of us complacently sitting at home that even while we live in peace with our neighbours and without the threat of imminent nuclear war, there are brave English forces and their families who trained to be the best, do their best, and give the ultimate sacrifice for our country. I have read many moving posts in the last few weeks regarding Remembrance Sunday, all of them appropriate and respectful and while the memorial date has passed, we all still need to remember and thank those still being courageous, brave and all sacrificing every day of our lives to keep us all safe.

I hope this venture of Gareth’s catches on in other military communities and helps those left behind to battle on without their loved ones. Who knows, perhaps it may even have helped those at war to know that maybe, just maybe, their families’ lives are made just a little bit easier in their absence through this new gift of song and fellowship.

So keep up the good work Gareth and keep singing your hearts out girls! I for one, think you are all fabulous.

12 thoughts on “A Tribute to The Choir: Military Wives – may their courage never cease”