The poor Little Chap has been in bed with a fractured ankle this week. We’re waiting for an  outpatient’s appointment on Tuesday to see if he needs a full cast, or if it has healed and he can use it again.

Last week he had chickenpox, which developed complications leaving us visiting the GP twice on Sunday, wondering why he had a sudden very high temperature and wouldn’t put his weight on his left leg – or let anyone or any thing touch it! He also seemed very lethargic and generally unwell. Thoughts of post viral arthritis, infected chickenpox spots and worse went through our minds. Our GPs were great and didn’t hesitate in sending him to A&E for a second opinion.

So 48 hours, 7 x-rays, 1 swab & 3 attempts at inserting a canula later, he had endured multiple blood tests, 2 intravenous doses of antibiotics, multiple doses of paracetamol and ibuprofen and 8 doses of oral antibiotics before the orthopaedics team thought he had indeed fractured his ankle as well, which would now need setting in a temporary cast. The good news is that the paediatric team acted fast to get rid of the bacterial infection which isn’t anything particularly nasty and he’s now making a good recovery.

We reckon the poor mite may have fractured his ankle a whole week before he complained it hurt! We’ve been told it is entirely possible that the infection triggered pain in his foot that would otherwise have not hurt and just healed up as he ran about every day.

In true Little Chap style, he’s taken it all in his stride and been a really brave soldier. Having been pretty much bed bound for almost a week now, he’s not lost his sense of humour or his patience once. This morning, we played with his playmobil knights and he inspired me to write the following little ditty:

“There was a knight so brave, 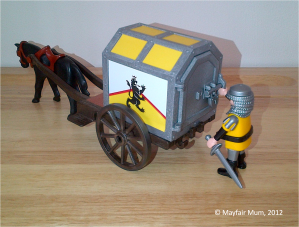 His name, you know, was Dave.
He chased a fierce dragon
Who he locked in his wagon
And dragged off to shut in a cave!“

Have you ever had a little one in a cast and off their feet for a while? How did you amuse them?