When we moved in to our family home a little over five years ago, there was nothing built-in to keep our books on. There was just a wall with a radiator rather inconveniently right in the middle of it. So installing the floor to ceiling bookcases we dreamed of would involve removing a valuable heat source and unjustifiable cost. We quickly found the lounge swallowed the bookcases we had brought with us but there was no extra wall space for more and our lifelong book collection still numbered many unpacked boxes.

So we asked a friendly carpenter to build some over the radiator in our living room and this is what he came up with. 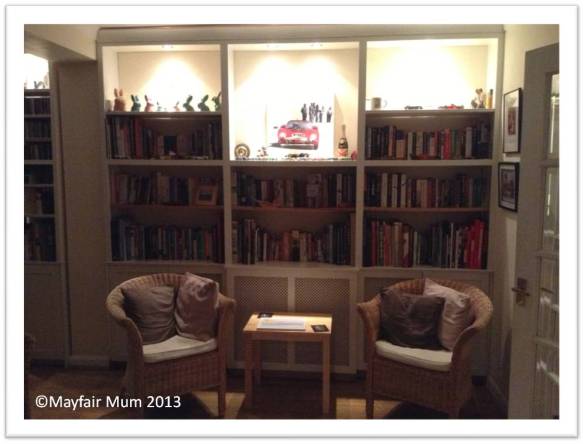 Good job eh? So what do the books say about us…

Not unadventurous, but a practical, planner nonetheless | Mayfair Dad and I have been fortunate to have visited many wonderful cities together for which we have collected various EyeWitness Travel Guides. Then there’s the handful of useful Inside Out City Guides I bought to make sure I didn’t get lost when I went to the US on business before Little Chap came along. They came complete with pen, compass and pop up map and were small enough to fit into my hand luggage.

Culturally aware | I grew up close to my grandfather, who was a director in the Post Office from the 1930s. An electrical engineer and amateur radio enthusiast, communication and globalisation were his game. I learned an interest in and respect for other cultures at his knee and have enjoyed reading many novels about those with the most interesting histories, like Mother Russia by Bernice Rubens (a potted history of 20th Century Russia) and Becoming Madame Mao by Anchee Min (China pre-revolution). I particularly enjoyed Ffyona Campbell’s On Foot Through Africa – a real girl’s own adventure.

Learns from the past | I adore reading historical fiction. Anything from Ancient Egypt, Ancient Greece and Rome, early Britain and particularly the Tudor and Stuart period. I admire the research that goes into making such otherwise alien times come to life for the reader. I’m particularly looking forward to devouring the latest Philippa Gregory, The Lady of the Rivers. So what has this taught me? That I’m bloody grateful to be a woman in the 21st century ‘cos I’d either have been burned as a witch or left to rot in a mental asylum by now!

Likes classic/sportscars | When I met Mayfair Dad, he wooed me in an open top sports car. Well an MG Midget to be precise. This is mostly his collection of beautiful coffee table books but don’t be fooled – quiz him on who won which Grand Prix and he’ll prove he’s read most of them from cover to cover!

PS: If any PRs are reading, he has a passion for Aston Martin DB7s, Ferraris and Jaguars in particular (…oh and MGs of course!).

Is a material girl | No this isn’t a biography of Madonna! Another of Mayfair Dad’s passions is capital markets, naughty traders and how the City works in general. Don’t worry, he doesn’t have sinister ambitions to diddle anyone out of millions, he’s been building a fantasy stock market game, FoXSE in his spare time, which he hopes will one day make him millions instead! It’s also available as an ipad/Android app. He’s quite clever and I’m quite proud. *shameless plug alert*

I haven’t given up on my marketing career just yet | As you can see I’m well read on the subject and qualified too (most of these were my CIM Diploma text books). I’m a never say never kind of gal…

I found this blog hop from Keynko over at Mammasaurus‘ place. You can join in here.

I know you lot have bookshelves too. So come on, join in. Take a snap and tell us what they say about you!

Disclosure: I am an Amazon Affiliate. If you click on any of the Amazon links embedded in this post and make a purchase I may receive a small commission at no extra cost to you. But first, try your library or local independent book store. All books mentioned are my own.

11 thoughts on “What Do Your Bookshelves Say About You?”