The fields are full of golden, ripened corn, tractors organise hay bales into strict lines and freshly dug potatoes into small mountains. As we drive past hedgerows, seed heads nod, dark shadows in place of the blood-red poppies seen at Summer’s peak.

It’s harvest time and the leaves are already falling from the trees. There’s a definite autumnal nip in the air now at the beginning and the end of the day, summer’s heat lighter and easier to wear for the freshness of it. The school holidays are all but over and Summer is winding down for the new term, when Autumn will take over with her usual grace and subtlety, bringing cooler days as her own spectacular palette adorns the landscape before leaving us to the barren Winter chill. In homes across the land, children sharpen pencils and parents curse the mountain of uniform to label.

Last year, having not had Summer at all, just endless weeks of wet weather, we were less ready to slip into Autumn but this year we welcome it more easily. You may have wondered where I’ve been the last few weeks. Certainly not online. I’ve been blogging less and living more but I like having this space here, waiting for when the time is right to come back. I hope you don’t mind waiting for me now and then.

This year we had a real Summer so I tried to make sure we got out and about in the warm sunshine and made it count. There’s nothing like happy memories of warmer days to see you through the colder ones of winter is there? Here is a snapshot of just a few of the plans we made, captured for posterity:

First we caught up with old friends from NCT. No longer able to afford the luxury of our almost religiously regular Friday afternoons, since little ones grew up and progressed to nursery, we mostly keep up with each other via Facebook and the occasional birthday party, so a sunny afternoon on the farm was the perfect start to the summer break.

We picked strawberries and black currants in blistering sunshine. It was rather different from the quick splash through strawberry plants in puddles last year, when we only just made it back to the car before the heavens opened!

A Week in York

We are lucky enough to make use of my in-laws’ bungalow in the Yorkshire Wolds from time to time. So we enjoyed a few days there with Little Chap’s grandparents, before heading to a cottage by York Minster by ourselves.

It was our first summer holiday as a family without a buggy. Hurrah for independence. Rather than pushing something laden with two stones of exhausted child, together with the day’s purchases, a set of spare clothes, snacks, drinks etc, we occasionally had to carry the two stones ourselves (now actually two and a half stones!), but thankfully were able to leave the rest at home if it didn’t fit into a small ruck sack.

The Minster being right in the centre of York, we were well placed to walk to and from our favourite attractions like the National Railway Museum, the Jorvik Viking Centre and Clifford’s Tower, while enjoying the freedom and flexibility of self catering. All accompanied by sunshine and the regular chiming of the Minster bells!

The blistering heat continued into July and Little Chap enjoyed meeting up with one or two buddies from his school at Camp, which runs each year at my old school a few miles away. Knowing the grounds were secure was reassuring, as “Camp” felt like I was letting our young pup off the leash somewhat after the security and exceptional care he has been lucky to have at Nursery.

Camp is far more relaxed even than Nursery, but Little Chap rose to the challenge and enjoyed all sorts of new experiences including go-karting, archery and tennis. I was proud of him for holding his own with the 5-7 year olds. Although he was only four, being so close to his fifth birthday the organisers were happy for him to join in with the older group and I think he would have been bored in the nursery. Several of his contemporaries were in the group due to having older siblings in it too. I no longer think he’s too little to be going to school and can see how ready he is for all it will offer.

A Day Trip With Friends

We enjoyed a lovely day out at the Butterfly World Project in St Albans.

One of Little Chap’s best school friends has his birthday at the end of July and part of his present was a visit to The Polka Theatre in Wimbledon to see Charlie & Lola. His friend’s mother asked a few of his friend’s parents if we would like to join them there with our small people, so we did.

Grannie Daycare took us to The Savill Garden for the day. The clouds were grey and rainy but by the time we arrived, the skies were lighter. Grannie took us on a grand tour after a very acceptable lunch. This took in some beautiful old trees, some magnificent summer planted beds and a rose garden.

Sadly, the latter had passed its best but it had a fabulous wood and metal structure in the middle of it, from which to view the planting. Little Chap adored it, as it was a little like the rising prow of a ship. So needless to say, he had to rush off to the very end of it to play the part of Captain Hook! It was a very relaxed stroll for me. Little Chap must have run/walked about four times as far though. He was rewarded with a short play in the children’s play area just behind the car park, while Grannie and I rested on a warm rock and watched as Little Chap tried to make friends with a couple of pretty older ladies…!

Excitement and adventure at Savill Garden

The mother of another very good friend of Little Chap’s who will be joining him in Reception next term suggested we meet for coffee at a local garden centre one morning. The weather was sunny and warm (again!) and having something different to do seemed to suit the boys, who are otherwise inclined to a little over excitement!

They had a special kids’ activity day planned. For £3.00 Little Chap and co were given good-sized terracotta pots and encouraged to fill each of them with a little compost. Then they were given a strawberry plant to add and fill up to the top with more compost. Once planted, the pots were at their mercy, as the garden centre provided paints, brushes, glitters etc (together with thoughtful, disposable plastic aprons) for their creative juices to run riot. A lot of fun was had by all and the Mummies got to enjoy a coffee and a natter in relative peace (for all of five minutes…).

The boys didn’t last long once snacks and drinks were consumed so we distracted them by taking them into the pet shop next door to look at lop-eared rabbits, guinea pigs, hamsters, mice and various fish of all sizes and colours.

Then it was time for lunch so we drove home with our strawberries hoping for enough sunshine to get some fruit from them before the end of the growing season. Unfortunately we were away in York the following week again, and it was hot and dry so we came home to dried fruit

I want Little Chap to enjoy those lazy hazy outdoor days of summer but I realised that being a working parent, even part-time, I have to schedule this time if I want it to happen on my watch. My mother has green fingers so I know she has been letting him explore and learn in her vegetable and fruit garden while she’s been looking after him for me – I think he knows more about it than me now! My in-laws are similarly keen gardeners so encourage him to play and learn outside too.

So I was particularly thrilled to find Little Chap making friends with a ladybird in the garden. He was making her a nest out of grass and at one point, I knew I had nothing to worry about, when I rescued her, nest and all, from the little box on the back of his bike! Hmmm…

We also managed a few days just chilling out on the carpet with his favourite toys! 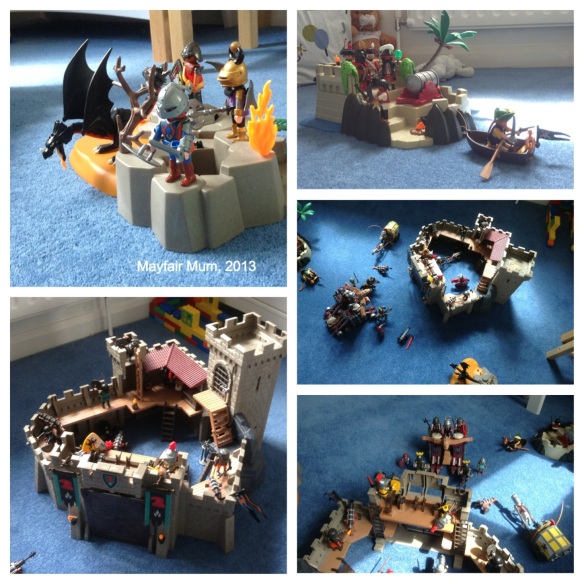 Back to York
We just managed to squeeze in a second lovely week in York before school started again. Little Chap is already very attached to the City and its attractions, having almost been nowhere else on holiday since he was born. He seems particularly fond of Tabitha’s House, the bungalow we stay at in the Wolds.

He has been quick to develop his own holiday rituals – he always goes to say hello to Tabitha, the stuffed cat that sits in the lounge. He gets very excited about the sleeping arrangements, which include a put you up bed in our room for him. We have to check on the local landmarks like the church (where he was christened), the sweet shop (in case they’ve run out of chocolate mice) and the deli (who serve rather nice coffees for us accompanied by toys to amuse Little Chap).

It warms my heart that he feels this way about our choice of family holiday location. As I grew up we revisited my grandparents’ holiday flat on the south coast year after year. While we repeatedly whined at our parents for a holiday abroad like our friends had, once we arrived, similar rituals were quick to comfort us.

There was Gina’s, the general store across the road, run by Gina herself, no doubt approaching retirement herself now, if not many years ago already. There was the village bakery, always good for a jam doughnut, the donkey in the field down the road and various naval landmarks worthy of attention. Nothing of any great worth really, just special memories associated with happy times.

And that is all you can ask of summer memories really, isn’t it?

What were your favourite summer holiday moments? Feel free to leave a comment with a URL link, if you have also blogged about your own…