I received a voucher for free download of the Tree Fu Tom 3D Adventures app. All thoughts and opinions are my own.

Just over a year ago now, Mayfair Dad bought me an iPad for Christmas. I have to admit I was sceptical about the role it might play in my life, but fourteen months on, I can’t live without it. Problem is, neither can Little Chap.

It was all so innocent, with “educational” apps encouraging his early exploration of letters, shapes, numbers and colours and quickly escalated to playing anything and everything he could get away with – he’s even started on my Jigsaw World app for heaven’s sake (and he’s getting as good as me at it!). Now, Little Chap is still only five and while I wouldn’t dream of holding back his development in any way, I do worry about how much time he would like to spend in front of a screen for the sake of his eyes if nothing else. The more he uses computers, tablets and TV the more familiar he becomes with the technology and the more independent he wants to be with it. This is not ok with me. Also, Little Chap has an increasingly voracious appetite for new information and experiences, meaning I spend a lot of time and energy worrying about what he watches or plays. At the same time, I don’t want to glamorize it all for him by restricting it too much. Ah, there’s that parenting Holy Grail again. Balance!

When he was two or three, it was easy to plonk him in front of an episode of Tree Fu Tom or Octonauts on CBeebies, while I did a quick half hour of housework or made a phone call. Now, I’m more worried about leaving him unsupervised. It’s not that he’s off surfing Netflix for the 18 movies yet, it is that he could easily stumble on them if his curiosity got the better of him while I turn my back for a second. A small (ish) part of me would really be happy if he could watch CBeebies forever!

So imagine my delight, when I was asked to try out a new app for preschoolers over half term – which Little Chap loves. We had two family trips to the movies that week – the new LEGO Movie and Brave – so the rest of the time, we made a point of doing as much without a screen as possible. We got out and about when it wasn’t too wet (!). We visited Grannie for tea and there was that walk to our local Water Meadows (aptly named), where Little Chap learned first hand that it isn’t always best to walk in the wettest, squelchiest mud, that you invariably get your wellies stuck, lose balance and end up falling in. Luckily for everyone, it was only the hands that got stuck in this time!

Anyway, after some extensive investigations of my own first, I did allow a little iPad time when, at the end of the week, he was getting to that “you are SO ready to go back to school” stage. The very first Tree Fu Tom App Tree Fu Tom 3D Adventures, based on the hit CBeebies series, was released on 17th February 2014 on the App Store for iPhone, iPad and iPod touch.

I was a little worried that Little Chap would be less than enthralled with another CBeebies app. He asked me to download the new CBeebies PlayTime app recently, which also has a Tree Fu Tom game on it, but I needn’t have worried. As soon as he saw me checking the 3D one out (at his age, I would never let him play an app I haven’t thoroughly vetted first, from bitter experience! If for no other reason than to switch off access to my camera, for fear I find my iPad grinding to a halt because he’s taken a hundred and fifty photos of half his face or of Mr & Mrs Potato-head in various costumes…!)

So why pay for this app? Well, Crane Media and FremantleMedia Kids & Family Entertainment developed this app and used ground-breaking SLAM (Simultaneous Localisation and Mapping) augmented reality technology (whatever that is! *feels old and out of touch*), that allows users to fly Tom and Twigs in real world surroundings – like the living room or where ever they are when they play it.

User Tip:  I advise encouraging your child to play this sitting down if you have the larger iPad or a younger child, at least until they get used to moving the device (unless you want a broken screen that is…)

The app comes with plenty of instructions (thankfully), in the form of a video tutorial, (switch it off in the Advanced Options). I thought I might walk Little Chap through this first but he had little patience for my fumblings and couldn’t wait to be let loose to play with his new friends! Simply by holding my iPad above a magazine or book, we magically launched Tom and his sidekick Twigs into the real world for some interactive game play and magical augmented reality fun.

The app allows children to make their favourite characters take to the skies, leafboard across the room, land on objects, talk and do Movement Magic all in their own environment. Little Chap loved being able to make them do his bidding at the touch of the screen though it seemed a little tricky at first to line things up right to make it work. Hey, practice makes perfect though and that means less screen time for all those other “less educational” games!

Enhanced Options mean that with your blessing, kids can further enjoy themselves in the 3D experience taking photos and making videos of their heroes. By allowing Tom to ‘magically’ appear in their own world the app tries to encourage pre-schoolers to use their imaginations through creative play and storytelling. They can leaf board round your living room, create spells and chase each other around the kitchen table.

If you’re a control freak like me, you’ll love the Parental Options giving you control of your child’s access to sharing tools so your child can share the photos and videos they create with friends or family through social media (or not, as you see fit).

The app also features three thrilling games that help your child develop their movement and  co-ordination skills. Just like the premise behind the Tree Fu Tom TV series, magazine and merchandise. Each child can create their own profile saving the points they score in the games, along with rewards earned for use in the 3D Adventure.

1. Nectar Collector: Help the bees gather honey against the user’s own world backdrop.

Send the bees to the hive to help them collect nectar

2. Slimeweed Defence: Tilt the device to defend yourself against the slime-spitting weeds. 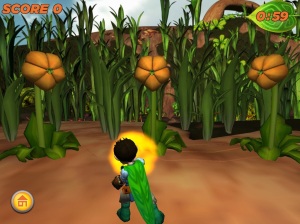 3. Aphid Rescue: Children first trace their finger around the pattern to activate the ‘Super Net Go Spell’ then touch left and right on the screen to bounce the baby aphids on the Net and give them a soft landing.

Trace your finger around the glowing sap to activate the spell…

…then save those cute baby aphids for Ariella

The Tree Fu Tom 3D Adventure App is available for £2.99 from App Store on iPhone, iPad or iPod touch or at http:// www.AppStore.com/TreeFuTom3DAdventure

Tree Fu Tom is a magical and interactive action adventure CG animated pre-school series which follows a young boy called Tom who can use Movement Magic (‘Tree Fu’) to transform in to a tiny but mighty magical superhero and travel to Treetopolis, an enchanted world in a tree at the bottom of his garden.