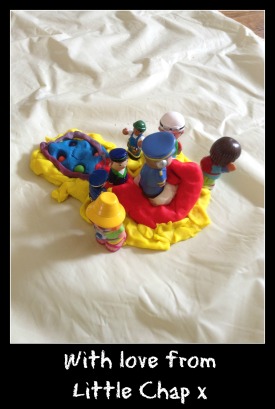 While it was raining on Saturday afternoon, instead of my usual swimming lesson, Mummy and I decided to make things with Play Doh. Daddy was in the garden, doing some jobs for Mummy while we kept dry!

Mummy made flowers, which I helped her with. She posted a picture of these for her Silent Sunday post. I decided to make a volcano when she was finished photographing them. I broke up all the flowers and used the blue Play Doh for some water. I used the white Play Doh to build a mountain. I used the red Play Doh for the lava. I used the yellow Play Doh to make the sand. I put different coloured Play Doh together to make different coloured people swimming in the water. I built some snakes that were purple to make the net that fired lightning at the sharks to knock them out. I put my plastic people from my city on the volcano and water.

My favourite bit was making one of the flowers.

My Mummy’s favourite part was mixing the different coloured Play Doh together to make new colours. She mixed red and white to make pink, blue and red to make purple, blue and yellow to make green. She tried to mix red and yellow to make orange but it was still too red, so she added some white, which turned it orange. She was quite surprised about this, she said, as her teachers had always taught her that red and yellow make orange! She says you learn something new every day.