Me? I love a good stir-fry. Chinese, Thai, even Singaporean, I’ve cooked them all. Or so I thought…

As a student, I managed to eat well on a typically meagre food budget, using the stir fry as my guide. (That and taking every opportunity to get my parents/grandparents/boyfriend/friends to feed me on their budget instead!). My mother proudly sent me off to Uni with a wok and a small saucepan (useful for simultaneously cooking rice/noodles and occasionally pasta for sauce!).

A couple of decades later and most of the time these two items remain the staple constituents in my kitchen. In fact, I still use the set of saucepans we were given as a wedding present (ten-year warranty long since expired!) but have had to replace the wok twice in the same time due to extensive use and over zealous dish washing.

Working and playing hard for fifteen years and now juggling shorter working hours with the added demands of family, I have never afforded myself the luxury of time to cook. That said, however, I’ve remained unwilling to compromise my ability to cook from scratch with healthy, nutritious ingredients which is where my love affair with Quorn comes into the story.

As a student, in the nineties, I discovered its lean, high protein chunks were as good as chicken in most stir fry recipes, cooking just as fast and for considerably less money per portion. It froze easily and could be cooked from frozen – a distinct advantage over the chicken breasts and pork escalopes I otherwise cooked.

Of course, none of this is to suggest that Mayfair Dad is a caveman who keeps me chained to the stove! In return for my brief interludes in the kitchen Monday to Friday – I genuinely find all that slicing and dicing therapeutic, especially when a stressful day needs to be “processed” – MD tends to be a more leisurely cook, so has assumed responsibility for feeding us at the weekend with that expensive stuff that takes a while to cook – you know – meat!

So when I received some vouchers to pick up some of the new products in the Quorn range and try out one of their suggested recipes from their website, I jumped at the chance.

I chose their new range of Quorn Fajita strips and the recipe suggested was a stir-fry. 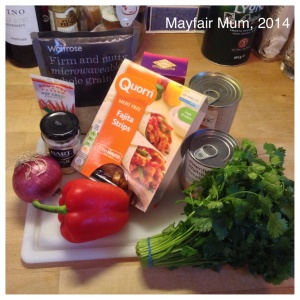 2. Heat the vegetable oil and cook the onion for 5 minutes or until softened, stir in the red pepper, chilli and garlic and cook for 3 minutes. 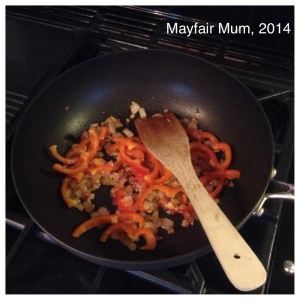 3. Stir in the Quorn fajita strips and continue cooking for 5 minutes before adding the beans and the sweetcorn.

4. Finally stir in the rice, tomatoes, coconut cream and coriander.

5. Season to taste and add a few drops of tabasco sauce for an extra kick, if required. 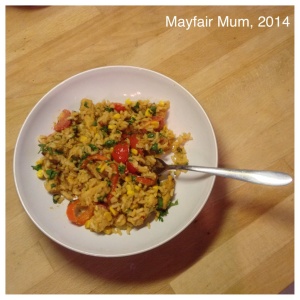 The bonus? Not only was this low in fat, high in protein and utterly delicious, there was enough to serve two adults for dinner as well as leftovers – I took a portion for lunch in the office the next day (just as delicious) and gave a small bowl to Little Chap for his tea. Even better, he found it delicious and ate it all up!